There is no escape from art

This is the first solo exhibition of Belgian artist Jan Fabre in Bulgaria. With the support of the Embassy of Belgium in Sofia. He is one of the most important visual and theatre artists of his generation. Jan Fabre was the first living artist to receive a large-scale solo exhibition at one of the world’s most important museums: the Louvre. The exhibition ‘There is no escape from art’ at the Sofia Arsenal – Museum for Contemporary Art presents a unique ensemble of performance / film, drawings, photography, and sculptures in which the search for an understanding of the identity of the artist, and the identity of art, are questioned. The self-portrait and the ‘disappearance in many appearances’ of the artist are its starting point. For the first time creations linked to Fabre’s historical exhibition and performance at the Louvre in particular are brought together.

At SAMCA, the performance/film ‘Art kept me out of jail (Homage to Jacques Mesrine)’ is shown as a self-portrait, not of Fabre as an individual, but of the artist in his desire to escape a singular identity. Jan Fabre is a consilience artist and a man of a thousand faces. His performance / film originates in the early eighties, when the artist performed several unannounced street actions as a tribute to Jacques Mesrine, a French gangster who was, for a long time, considered public enemy n°1 in France. The title ‘Art kept me out of Jail’ is the title of a performance by Jan Fabre in New York in the early 1980s. A new interpretation was given to ‘Art kept me out Jail (Homage to Jacques Mesrine)’ in 2008 in the length of 70 meters of the Galerie Daru at the Louvre, during his exhibition ‘L’Ange de la Métamorphose’. He made a new performance: a four hour long cat-and-mouse game with the press and the audience in the so-called “largest, most expensive and best guarded prison in France: the Louvre.” The funny and playful aspects of the performance / film are seen at SAMCA: every now and then we see famous curators and critics, towards whom the artist takes up an ironic attitude during his performance.

Why this tribute to Jacques Mesrine? Jan Fabre says: “In my life there were always two choices: to become a good artist or to become a good gangster.” For Jan Fabre, Jacques Mesrine is the symbol of a passionate personality, someone who tries to survive by means of disguises and succeeds in escaping regulations and institutions. It is never about romanticizing the gangster’s aggression or violence, but about the lust for life, the energy and vitality – his conviction to change society, and his faith in the anarchy of love.

November 22nd, 1979: police officers open fire on Jacques Mesrine near the Porte Clignancourt in Paris, and kill him. Mesrine had led a life of criminal activity for decades. His escape from the maximum-security prison La Santé is one of his most famous feats. He was referred to as ‘the man of a thousand faces’: thanks to his many disguises, he managed to successfully hide despite all the media attention surrounding him.

Metamporphosis is an essential theme throughout the exhibition. The change of mask and costume for every new venture. The disguise as an element of continuous change of identity. Jan Fabre  will continue shedding his skins, appearing and disappearing there is no escape from art, until exhausted, he escapes in death at the feet of the Nike of Samothrace, pierced by the same number of bullets as Jacques Mesrine was near the Porte de Clignancourt in Paris.

The feeling of escaping has always been important to Jan Fabre. He has always felt as an ‘escape artist’. “It is impossible to ‘frame’ me, to define me by a single category, as a theatre artist, or as a visual artist, or in the literary world. I am a one-man movement,” Jan Fabre says.

The series of drawings in ‘The Escape of the Artist’ is a pattern-card of identities, suggestions for disappearance. Might some be inspired by Mesrine’s disguises? Every self-portrait shows Jan Fabre wearing a remarkable necklace, most often including a religious symbol.

Two four-sided Janus sculptures, also self-portraits of Fabre, are equally entitled ‘Homage to Jacques Mesrine’. The Roman god Janus – god of gates and transition, of change and time – plays an important part in Jan Fabre’s oeuvre. These two wax sculptures show the rigour of the ethical and aesthetical bite of the artist in the history of art.
Are the eight black and white photographs showing an escape artist in ecstasy? Are they revealing an artistic desire to disappear in the appearance? The photos often show him with an open mouth: sweating in ecstasy? And screaming: the body, in any of its appearances, merely a spokesman for art. “You can take everything away, but not my ideas, not my intentions!” Do the photographs represent the thought that each material appearance is inferior to the spiritual soul it carries? 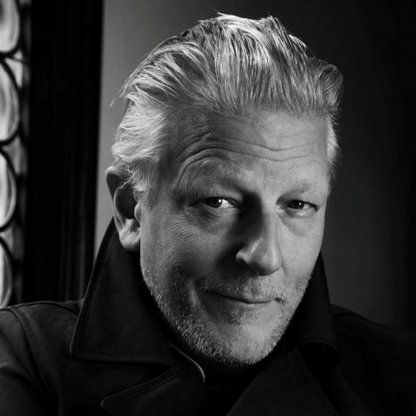 With a career spanning some forty years, Jan Fabre (b. 1958, Antwerp) is regarded as one of the most innovative figures on the international contemporary art scene. As a visual artist, theatre artist and author, Fabre creates an intensely personal atmosphere with its own rules, laws, characters, symbols and motifs. He became fascinated by the world of insects and other creatures at a very young age. Metamorphosis and the constant interaction between animal-human and human-animal are key concepts in Fabre’s visual canon. He explores ways of incorporating the human body into his research. His own performances and actions, from 1976 to the present, have been essential to his artistic journey. Jan Fabre’s visual language exists within an idiosyncratic world, one that is populated by bodies that define natural existence through a permanent balancing act on the thin line between life and death. His oeuvre is influenced by the research of his namesake, entomologist Jean-Henri Fabre (1823-1915) and the consilience theory of E.O. Wilson (°1929).

Key solo exhibitions by this versatile Belgian artist include ‘Homo Faber’ (KMSKA, 2006), ‘Hortus/Corpus’ (Kröller-Müller Museum, Otterlo, 2011) and ‘Stigmata. Actions & Performances, 1976-2013’ (MAXXI, Rome, 2013; M HKA, Antwerp, 2015; MAC, Lyon, 2016; Leopold Museum, Vienna, 2017; Centro Andaluz de Arte Contemporaneo, Seville, 2018). He was the first living artist to present the large-scale exhibition at the Louvre, ‘‘The Angel of Metamorphosis’’ (2008). With his well-known ensemble ‘The Hour Blue’ (1977-1992), he has travelled to the Kunsthistorisches Museum in Vienna (2011), the Musée d’Art Moderne in Saint-Etienne (2012) and the Busan Museum of Art (2013), amongst other museums. Jan Fabre was also invited by Dr Mikhail Piotrovsky to create a large-scale exhibition at The State Hermitage Museum in St. Petersburg. For this project, which was entitled ‘Jan Fabre. Knight of Despair/Warrior of Beauty’ (2016-2017), the artist entered into a dialogue with the masters of Flemish art: Rubens, Jordaens and Van Dyck – his inspirations. In 2016, Jan Fabre was invited to present ‘Spiritual Guards’ at three historical sites in Florence: the Belvedere, Palazzo Vecchio and Piazza della Signoria. His most recent solo exhibition in Italy, ‘Glass and Bone Sculptures 1977-2017’, was a collateral event of the 57th edition of the Venice Biennale (2017). He will be present at the Venice Biennale 2019 with a new special project. 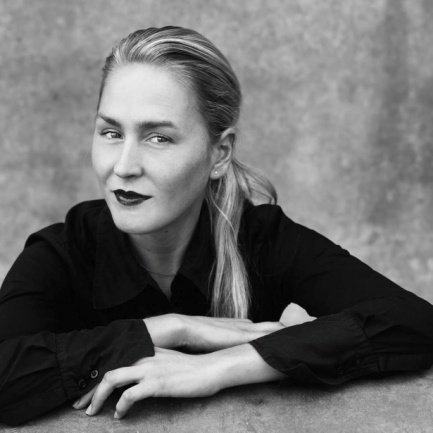 Joanna De Vos is an art historian and curator. She studied Art History at the University of Ghent and wrote a dissertation on the male nude photographed by women. De Vos created several art publications and was curator of, among others, the exhibitions ‘Facing Time. Rops/Fabre’, throughout the city of Namur and ‘The Artist/Knight’ at the Gaasbeek Castle.

She realized her most recent project, an innovative contemporary art exhibition, commissioned by the Van Gogh Museum. ‘The Sensation of the Sea. In Honour of Bas Jan Ader’ was a dialogue with the 19th century artworks of The Mesdag Collection. Several other international projects are upcoming. Follow Joanna De Vos on her website www.joannadevos.be, on Facebook and on Instagram.